History of the Stradivarius Violin 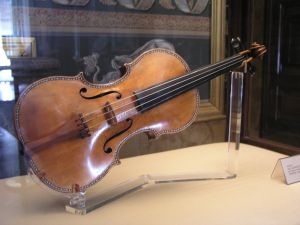 Considered the greatest violins ever made, Stradivarius violins have been handcrafted by master luthier Antonio Stradivari. Stradivari was believed to have been born in Cremona, Italy in 1644. Although the details of his childhood — including his birth place and how he managed to become the most skilled luthier in Cremona Italy — are not certain, one thing is: Stradivari dedicated his life to crafting and perfecting the violin. He reached prominence within his lifetime and has gained even more admiration and recognition since his death more than 250 years ago.

The earliest known Stradivarius violin was made in 1666, when Stradivari was only twenty-two. Some believe that he was the apprentice of Nicolo Amati, the grandson of violin maker Andrea Amati (1511-1577). Another implication is that he was a woodworker by trade, which would explain his genius talent in design and drafting.

During the beginning of his career, Stradivari created violins in the classic Amati style handed down to him from previous generations. However, even using traditional techniques, his skill and talent was impressive. For example, the Hellier violin produced by Stradivari in 1679 reveals his unmatched skill and ability to create a violin better than any other maker during his time.

In the 1680s, Stradivari designed and crafted full-bodied violins with rich physical and tonal characteristics. Although he continued to use Amatis basic structure of violin making, Stradivari eventually broke free from the Amati form to create his own violin models. His two sons Francesco and Omobono joined the family business around 1698 but neither showed the same fervor or talent as their father. Along with other helpers, Stradivaris workshop was able to produce more instruments as the master dove deep into experimentation.

Stradivari manufactured his best instruments from 1700 to 1725. It was during this time that he designed and perfected his violins, setting the standard for artisans of the future. During his golden period, Stradivari created violins whose sound boxes are unmatched even today. Along with the final redesign of the soundbox, his violins also introduced a unique deep red varnish, black edging, broad edges and wide corners.

Some of his most famous violins created during his golden period include the 1715 Lipinski and the 1716 Messiah. Never sold or given away, the Messiah remained with his maker until his death. Along with violins, Stradivari also made other stringed instruments, including cellos, lutes, mandolins, guitars and harps.

Stradivari continued to craft unmatched instruments into his late 70s. As he grew older and into his eighties, his work appears slightly less immaculate than those he created during the golden years. However, he continued to handcraft instruments until his death in 1737, including the 1733 Khevenhiiller.

Today, artisans and scientists still try to recreate what can only be the beauty and sound of a Stradivarius instrument. Stradivarius violins and instruments are prized possessions housed in museums and personal collections around the world.